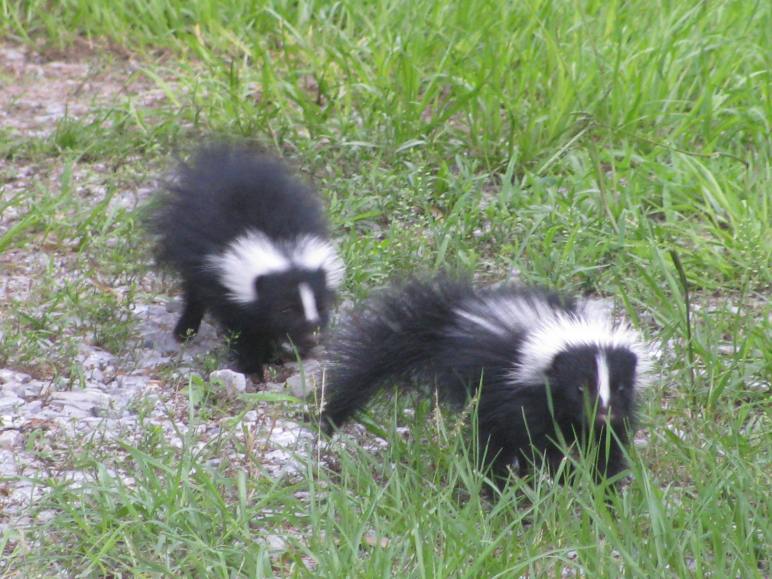 Just a thought to help start your week.

Yes, I sent you a picture of a skunk last week.  Well, here is another picture of two of the fuzzy little creatures.  Don’t they look cute?

Let me tell you, looks can be deceiving.  These critters stink, and it doesn’t seem to bother them at all.  For over a week now, my neighbor and I have chased these animals around our properties.  They roam around, looking cute and cuddly.  Then, just about the time we all head to bed, it’s almost as if NASA has dropped a massive stink bomb on our little hill.

Why do I tell all this?  Well, even with their odor, I’ve gotten some really neat pictures.  And one day last week, I stepped out into the gravel driveway and picked up a handful of rocks to begin tossing underneath our car to try and run off the one little black-and-white creature that seemed to be enjoying that shady spot.  As I bent over the pick up the gravel, I glanced to my left, and around the corner of the house walked a large beautiful red fox!

If but for just a moment, it and I stopped and stared at each other.  Then, before I had time to react, the fox trotted off and out of sight.  I forgot about the skunk and dropped my rocks to go tell my wife what I had just seen.

The stinking creature was still there, but for now, it was no longer my focus.  The “stinks” that the week ahead may bring your way do not have to be your focus.  Think on that.  And thank God that just about the time the stink could very well become more than you can stand, He sends a beautiful distraction your way to remind you that life has much more beauty than stink.